Bratislava’s Zoya Gallery will host the first leg of the exhibition from January 21st to March 25th, 2022, before the tour moves on to Warsaw and, subsequently, five other European cities. The selection of works by Italian artists comes from the private collection of the Farmafactoring Foundation, which BFF has been putting together since the 1980s. 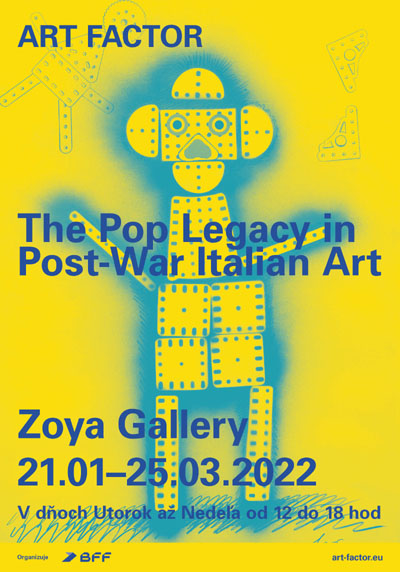 Milan, 20th January, 2022 – BFF is pleased to announce the opening today in Bratislava of the first leg of the touring exhibition “ART FACTOR – The Pop Legacy in Post-War Italian Art”.

The exhibition inaugurates the second phase of the project that was launched in 2020 with the book of the same name, published by Skira editore Milan Genève Paris. Today, the collection illustrated in this book is taking a giant leap into the future, since a number of the works have been selected to travel around Europe, visiting several countries in which BFF has a presence.

From 21st January to 25th March, the artworks – which have their permanent home in BFF’s Milan headquarters – will be displayed at the Zoya Gallery in Bratislava, within the baroque palace of the House of Erdody.

The exhibition will then move on to Warsaw for the second leg of the tour, where it will be showcased at the Palace of Culture and Science from 12th April to 18th May, 2022. Other cities that will then host subsequent legs of the exhibition include Athens, Lisbon, Madrid, Paris and Milan.

The selection of works celebrates the Italian art created in the second half of the 20th century, mapping its development towards Pop Art through the output of Valerio Adami, Franco Angeli, Enrico Baj, Lucio Del Pezzo, Gianfranco Pardi, Mario Schifano and Emilio Tadini. From the mid-1960s onwards, these artists engaged with a longstanding iconographic tradition, re-casting and transcending the avant-gardes and stylistic techniques of the past, while making use of a rich variety of resources, often deployed for purposes of social and cultural activism. Indeed, the project, curated by Maria Alicata, encapsulates the desire to be active participants in – not spectators to – those initiatives that generate value for society, and promotes cultural exchange and new perspectives through art and the lessons that can be learned from it.

As project curator Maria Alicata states: “This initiative highlights a history that has seen an entrepreneurial spirit being fused with a commitment to art and culture. The collection benefits from having remained aligned with the idea that has guided its composition and growth. With laudable farsightedness, long before it became de rigueur to do so, BFF started blazing the trail that is now followed by a great many companies in Italy and, indeed, right around the world, and which involves marrying the corporate identity to contemporary art and culture. BFF led the way in combining storytelling with corporate values."

Massimiliano Belingheri, CEO of BFF Banking Group, states: “This exhibition marks an important milestone in BFF’s willingness to make the collection a source of common, shared knowledge and values. Art inspires us; creativity and artists’ imaginations indicate new directions for growth. We stay curious, and we are committed to innovation. Hence the decision to promote the “Art Factor” as an engine of development for business and the community, and as a cradle of cultural exchange between different countries, especially at what is such a historically important moment.”

Marek Duban, BFF Banking Group’s Head of Slovakia and the Czech Republic, added: "We are delighted that the first stop-off on the exhibition’s tour is Bratislava, and that the Slovaks will be the first among their European peers to see these artworks on display. The initiative has allowed us to become acquainted and to collaborate with the local cultural scene, fostering what we hope will be a lasting relationship. We would like to thank in particular the Zoya Gallery for promoting and hosting a collection that, for us, is highly significant, and with which we are getting the chance to engage within one of the city’s most prestigious buildings.”

Iveta Ledecká, director of Zoya Gallery & Zoya Museum, comments: "I am very happy indeed that the Zoya Gallery is the first to host the touring exhibition organized by BFF. It is a unique and painstakingly curated selection of Italian contemporary art from the late 20th century. The purpose of the Zoya Gallery is not only to promote Slovak artists and their works, but also to provide an opportunity for foreign artists and institutions to present works from their domestic art scene. In this case, the focus of the collections of the Zoya Gallery and the BFF Group is quite similar: Pop Art and 20th-century artists. Each country has its own prominent artists who reflect the nation’s current affairs or historical events. And today we have here a selection of works by remarkable Italian artists that will immerse us in the versatility of Italian art and in its integration with the international context, in which it plays an important role.”

The exhibition is open from Tuesday to Sunday, from 12.00 pm to 6.00 pm. Access is free, by prior reservation, and is allowed only in compliance with the policies put in place to limit the spread of Covid-19.

TREND Magazine is the Media Partner of the initiative. This weekly magazine covers Slovak society, business, entrepreneurs and the economy.

The logistics partners for the project in Europe are Open Care - Servizi per l'arte and Fercam Fine Art. The former will deal with the monitoring and management of the conservation of the collection, whereas the latter will be responsible for the transport and setting-up of the exhibition in compliance with the highest standards of safety and expertise in the fields of art and cultural heritage.

***
BFF Banking Group
BFF Banking Group is the largest independent speciality finance provider in Italy and a leading player in Europe for the management and non-recourse factoring of trade receivables owed to suppliers by public-sector organizations; BFF also provides securities, banking and corporate payment services. The group operates in Italy, Croatia, the Czech Republic, France, Greece, Poland, Portugal, Slovakia and Spain. BFF is listed on the Italian Stock Exchange. In 2020 it reported a consolidated Adjusted Net Profit of €97.6 million, with an 18.5% Group CET1 ratio at the end of September 2021. www.bff.com

Farmafactoring Foundation
Farmafactoring Foundation is a private, non-profit organization whose main objective is to promote and develop research in the fields of the civil service and healthcare. Throughout its history, the foundation has conducted numerous studies, and has also sponsored important independent projects led by young researchers in the fields of economics and healthcare systems in Italy and across Europe. It also supports and contributes to numerous cultural and social initiatives. www.fondazionefarmafactoring.it/en

Zoya Gallery
The Zoya Gallery is a private, independent gallery, founded in 2005, which displays – for the most part – private art collections and works by 20th and 21st century Slovak artists. The gallery is located in the historical centre of Bratislava, within the baroque palace of the House of Erdody – a noble family in the Kingdom of Hungary – dating from 1770. The Zoya Gallery’s permanent collection is one of the largest private collections in Slovakia and encompasses more than 1000 works of art. The spaces also play host to temporary exhibitions of works by 19th- and 20th- century Slovakian and European painters, and provide the stage for cultural events. The largest part of the Zoya Gallery collection is constituted by 130 artworks by Andy Warhol (silkscreens, drawings, and paintings on canvas). www.zoyamuseum.sk