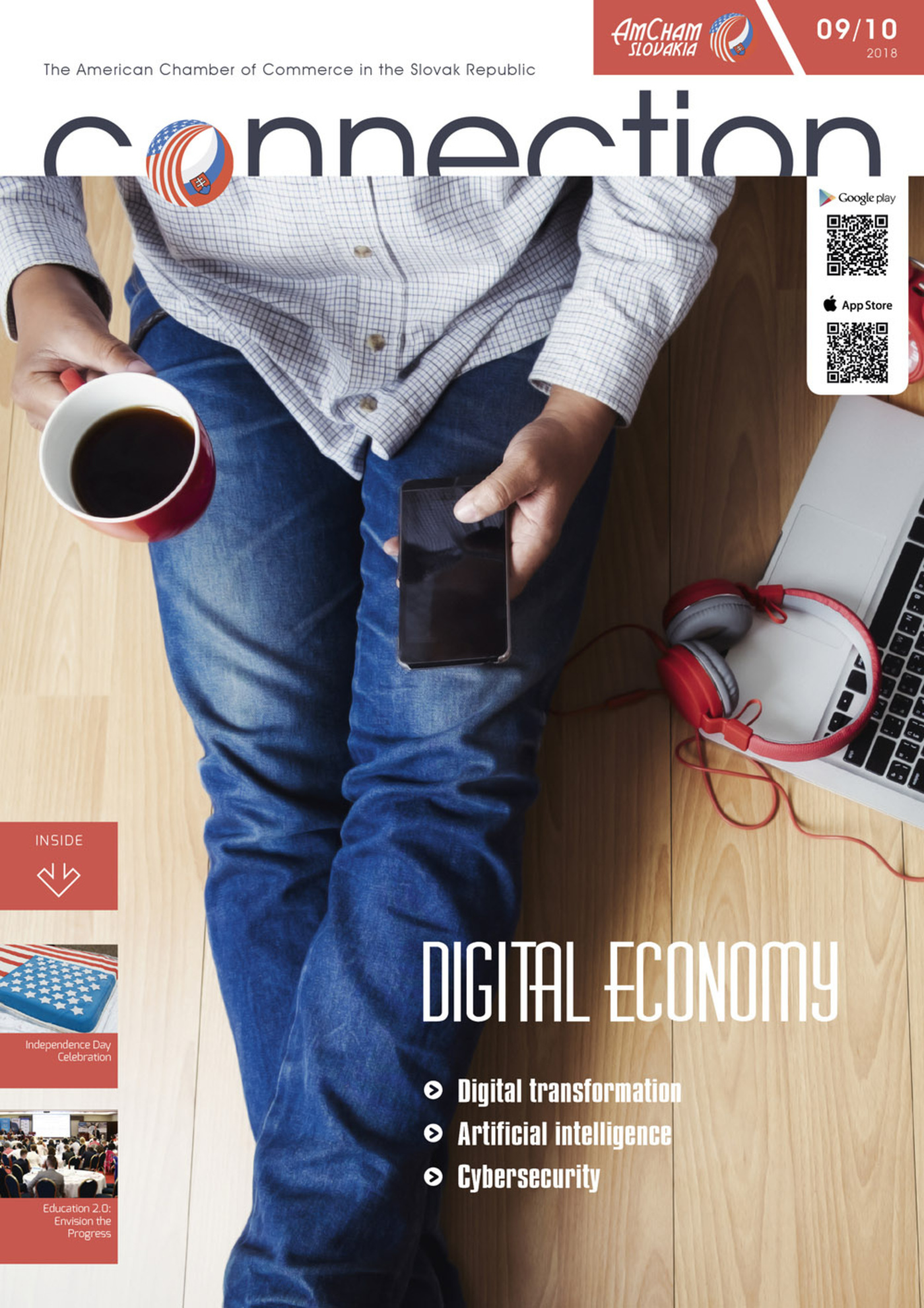 We are in the midst of a technological revolution that will fundamentally disrupt industry, public administration and our way of life. The invention of steam power significantly re-shaped societies in the 19th century and similar breakthrough technologies, such as artificial intelligence, self-driving cars and blockchain will do the same. This issue represents a challenge for every industry in every country. Leveraging fast-emerging technologies is a goal that all countries share. Governments and captains of industries must lead this process in order to make the most of the positive impact these changes will have on the economy and society.

Automation and AI - Opportunity or Threat for Slovakia?

Today, automation is no longer a futuristic blockbuster fantasy. The McKinsey Global Institute has estimated that by 2030 up to 375 million people (14% of the global workforce), could have their jobs automated away. This means that traditional assembly lines may no longer provide countries like Slovakia with the competitive edge they used to.

Never-ending transformation as an opportunity

Petr Mýtina of Ness Digital Engineering shares his opinions on how businesses must change if they want to succeed.

Traditional car makers or IT giants

Three important trends - electrification, car sharing and autonomous driving - are connected to the automotive sector. They have the potential to change our way of life. Their far-reaching impacts will influence the urbanism of cities and the wider landscape. In the medium term, we can foresee notable changes in the organization of public transport. A more immediate impact will change car ownership schemes, types of fuel for vehicles and, most importantly, driving itself.

Crowdinvesting: invest, co-own and build global leaders out of Slovakia

Crowdfunding has become increasingly popular over the past decade, yet it has been with us for centuries. The Statue of liberty in New York or the Czech National Theatre are both examples where communities funded an idea or a project. The latest innovation in crowdfunding is equity crowd investing allowing investors to invest in and own a share in privately held companies or real estate.

Flexing the human component of cybersecurity

Cybersecurity isn’t just a technology risk, it’s an enterprise risk—as such, it’s everyone’s business. But perhaps no one has more pressure to mitigate this risk than the Chief Information Security Officer (CISO).

How good is your system’s cybersecurity?

Hackers are often regarded as modern-day pirates. But this is a romantic view of people with the ability and willingness to steal and misuse you, your data, your privacy and your money. And don’t think that they have to be software geniuses. Extensive technical knowledge isn’t needed anymore, as there are many pre-built, ready to be used malicious programs to be had for free or at low cost. Furthermore, there are known “holes” in IT systems, which if not tested for and patched, allow attackers easy access to your environment to either insert malicious code or take your data.

We need to allow innovation to flourish

Slovakia’s innovative potential has been hotly debated for the past few years. Bratislava was even included in the cluster of Central European cities dubbed “The Danube Valley”. Although several examples of successful innovative companies or promising startups can be cited, the feeling prevails that much of this potential still remains unfulfilled. Adela Zábražná, Executive Manager of The Slovak Alliance for Innovation Economy (SAPIE) shares her thoughts on some of these issues.

Artificial Intelligence is changing the game

AI is technology that will significantly increase global GDP, change and disrupt businesses and intensively impact our lives at work and in private, although some people believe its impact will be negative. Take advantage of the opportunities to stay one step ahead of your competition, but also consider the risks.

IT experts are in short supply in Slovakia. As companies from all lines of business embrace digital, they need specialists. Cisco helps to fill the job market gap with its successful program, Networking Academies, that creates thousands of graduates every year. But there is a catch. “IT knowledge alone is not enough anymore,” says Marian Puttera, Public Sector Account Manager at Cisco Slovakia.

In its third year of existence, AmCham’s Digital Committee certainly can’t complain about a lack of activity in its area of interest. And as this brief interview with its Chair Filip Šváb of AT&T demonstrates, the committee will be more than busy with the latest developments in the digital arena at the domestic as well as European level in the months to come.

When will invoices become truly digital?

Eliminating paper invoices was for years a symbol for achieving the digital economy. This vision has started to materialize recently.  Step by step paper might be eliminated, but most of the digital invoices are still in visual form only. When will the e-invoicing unlock its true potential in the form of structured data, facilitating the next level of automation?

Big data is not just a buzzword

In a fast-changing digital economy, the innovation drivers like automation, cloud computing, big data and artificial intelligence are poised to change the future of work. In response to the growing popularity of the big data topic, we designed a new subject entitled Technologies for big data processing for our IT-oriented study program Business Informatics at the Technical University of Košice.

Blockchain – is it just hype, or does this technology really have the potential to disrupt the digital world and the economy? Blockchain offers enormous potential, for example in connection with smart contracts, but this technology is in its early stage of development, and legislation and legal interpretation also need to react.

ReactiveConf is a three-day European-wide web and mobile development festival in the heart of Europe made for functional developers. It’s a space where world-class JavaScript experts share their unique insights, daily hacks and lead powerful workshops. ReactiveConf’s 4th year is taking place in Prague this fall on October 29-31, and we interviewed Michaela Vlčková, its Chief Visionary Officer, about how it has evolved.