The level of R&D matters!

Research and development is the main driver of technological progress, new product development and rising productivity, which are necessary for stable and sustainable economic growth. Many studies have investigated the relationship between R&D expenditure and GDP growth. And the conclusion is always the same: the level of R&D matters! 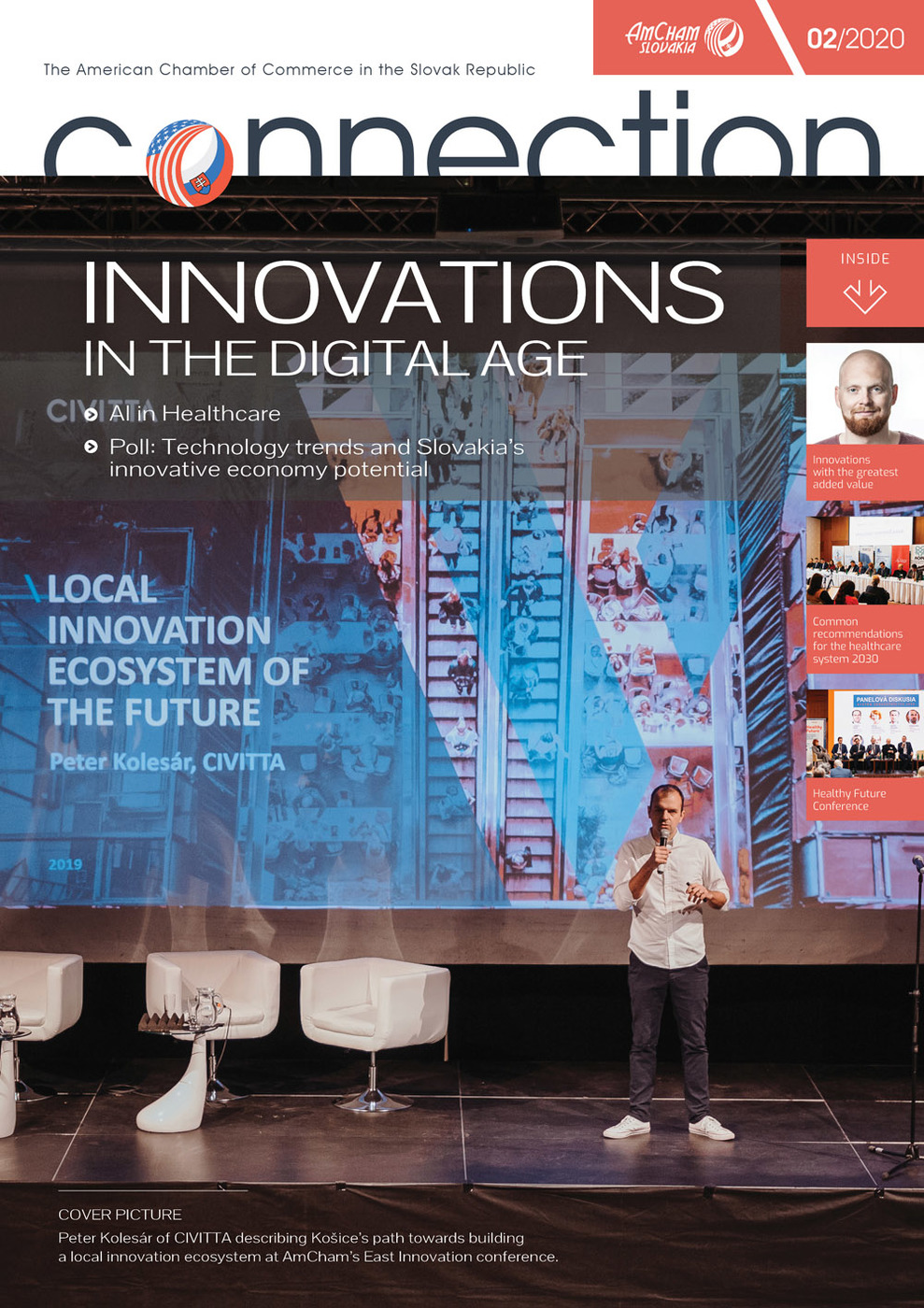 However, if we look at an international comparison of the level of R&D investment, the picture is such that Slovakia remains at the tail end of the European Union. In 2018, R&D expenditures totaled 0.84% of GDP, according to Eurostat, while in Germany it was 3.1% of GDP and in the EU28 it was 2.1% of GDP. The only countries worse than Slovakia were Romania, Cyprus, Malta and Latvia. A lack of R&D investment is, however, an issue for the whole CEE region. Only the Czech Republic performs slightly better. But all CEE countries still fall substantially behind the 3% target (R&D of GDP) that the EU is targeting. The indicator for R&D expenditures per inhabitant paints an even direr picture. R&D investment in Slovakia is almost five times lower than that of developed countries. In 2018, R&D expenditures per capita totaled 138 euro, while in the EU28 it was 657 euro per capita.

Low R&D expenditures might be an explanation for why Slovakia’s shortcomings in terms of productivity growth and indicators such as Gross Value Added (GVA) per employee. In productivity, Slovakia still lags behind developed countries even despite quiet solid fixed investment growth. Productivity in comparison with Germany and EU15 is still roughly half. It is worrying that the productivity gap doesn’t narrow much. Higher R&D investments could offer a solution.

What helps R&D investment in Slovakia are EU structural funds. In particular, R&D projects at universities and public research institutions are financed through EU funds. We note growing interest in funding from the Intelligent Development operational programme, which supports innovative R&D projects developed by small- and medium-sized companies, start-ups and industrial consortia. Among CEE countries, Slovakia is the most dependent on EU resources. EU money pays for roughly 35% of its R&D projects. Due to the high dependence on EU funds, R&D investment strongly correlates with the EU tapping cycle. In 2015, at the end of the programming period, R&D investment soared to 1.2% of GDP. 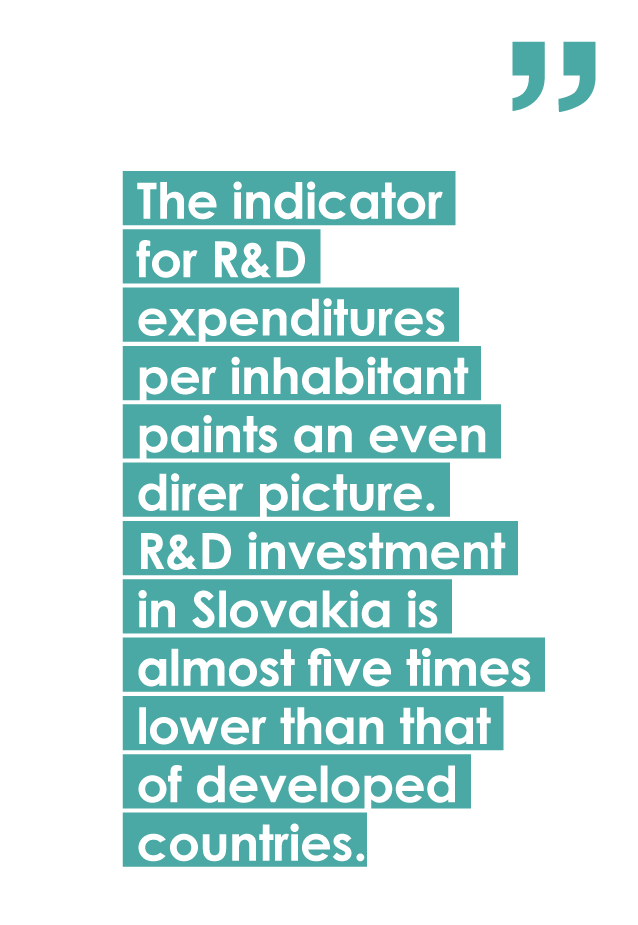 On the other hand, in 2016 when the new EU programming period began, the tapping of EU funds by the public sector got off to a slow start, which in turn pushed R&D expenditures down to levels last seen in 2011. Indeed, the drop in public R&D expenditures was so significant that even steadily rising R&D in the business sector was unable to compensate. In the longer term, high dependence on EU funds represents a risk, as EU funds will gradually shrink. Thus the government will need to ensure the upkeep of newly built R&D infrastructure at its own expense. Alternatively, R&D expenditures could stagnate or even decline, although the business world is investing quite heavily in R&D. It is therefore the non-business sphere, where money from EU funds or state budgets is almost the sole source of R&D financing, that could be in trouble.

The government sector plays an important role in R&D, as it finances roughly one-third of R&D investment in Slovakia. Most government money goes into research and development at high schools, public research institutions and centers of excellence. In comparison with developed countries, however, public sector investment is low and falls behind the EU average. CEE countries face the challenge of the common EU strategy Europe 2020, which has set a target of achieving an R&D expenditure to GDP ratio (called R&D intensity) of 3% by 2020 for the EU. CEE countries have a lower R&D intensity target of 1.7%. The key question is how to achieve this goal. The Slovak government has approved an increase of the R&D deduction to 200% of eligible expenses from 100% last year. This should make investment into R&D more attractive. However, it is a question of whether these measures will boost R&D in Slovakia substantially. In our view, they will not. 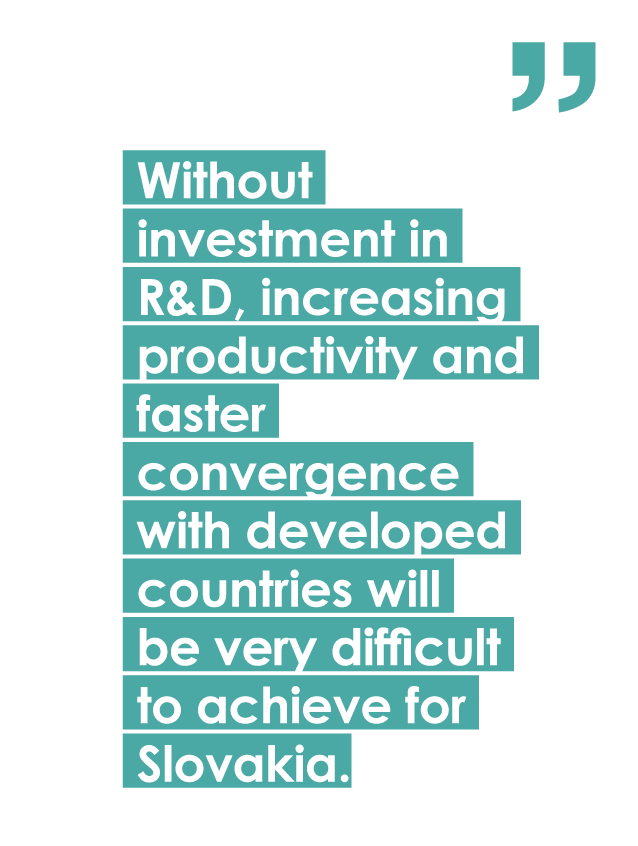 Most R&D investment in Slovakia goes into the manufacturing sector. This should come as no surprise given the structure of the economy. The majority of R&D funding within the manufacturing industry is spent in medium-high-tech sectors such as the manufacture of cars, motor vehicles and electrical equipment. By contrast, in developed countries, most investment goes to high-tech industries such as pharmaceuticals, biotechnology and nanotechnology or information and communication technologies. These are areas where Slovakia should increase its focus. But generally, higher R&D investment seems necessary. It is the task of the government to consider further incentives for the business sector to invest more. Without investment in R&D, increasing productivity and faster convergence with developed countries will be very difficult to achieve for Slovakia. 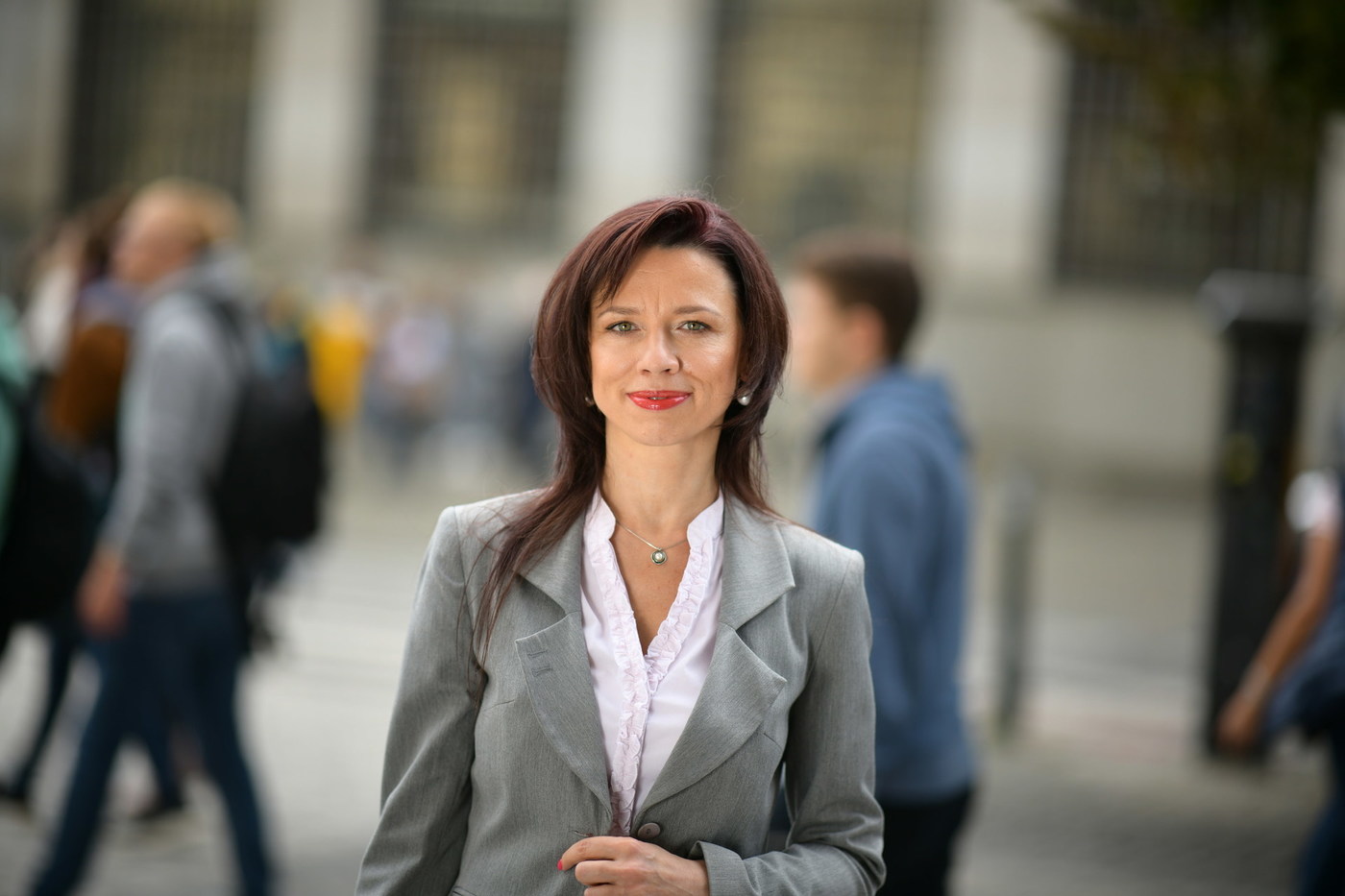