Essen: From Grey to Green

At the height of the industrial revolution, Essen was a hub of innovation, technological developments and new ideas. Change is still engrained in its identity, but now the city is leveraging its former industrial glory to achieve new transition goals. The German city is pioneering a path that builds on its history to implement strategies towards a green and just future.

In the early 19th century, the German Ruhr area where Essen is located, rose to prominence as the industrial powerhouse of the German national economy. However, in the second half of the 20th century, the region began to experience the decline of its signature industry. The economy which had been overly dependent on the mining industry took a dive. Residents suffered from the pollution associated with heavy manufacturing and the region’s environmental quality and natural resources were degraded. As in other post-industrial cities, structural changes led to long lasting effects which primarily impacted specific population groups and neighborhoods. This resulted in job and population loss, landscapes showing industrial wastelands, abandoned buildings and vacant lots.

However, the people and leadership of the Ruhr Metropolis area did not sit back, instead they took action. The jointly led “Strukturwandel“ approach brought together municipal and state leadership in recognition of the need to re-orientate the economic model in a way that would benefit both people and the environment. This program instigated investments in education and infrastructure but critically, also in environmental protection programs and urban renewal projects.

Since this shift, Essen has been a key leader in developing and implementing innovative sustainability strategies and initiatives and has leveraged its industrial past into opportunities for the future. 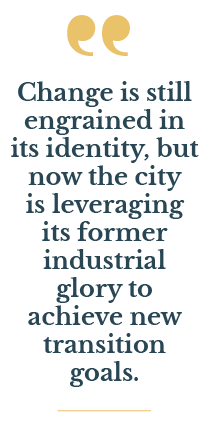 These sustainability measures have been taken through a button up approach with citizens as a key part of the transition process. The slogan of the city, “from Grey to Green”, has become a point of pride and a rallying cry for Essen residents. It is a narrative that maintains local identity, helps residents to understand the trajectory of their city and communities, and encourages them to support the transition in any way they can.

In practical terms, “from Grey to Green” means the city is prioritizing green and blue infrastructure first and foremost. In many development projects, either through private investment or publicly led, parks and lakes are implemented first and once they are in place, they become triggers for further investment. This approach promotes green and livable spaces and increases quality of life throughout neighborhoods.

At Local Governments and Cities Day at COP25, sitting alongside Essen’s Head of Environmental, Building and Sports Department Simone Raskob, Maimunah Mohd Sharif, Director General of UN Habitat, remarked on the need for bottom up approaches such as those that Essen has employed “It is not only about looking at the technology, “but also understanding the demands (of people and communities).”

Challenges and successes of Essen’s industrial legacy transition
Essen has defined a roadmap with a sound portfolio of sustainability policies that can have far-reaching positive consequences in the daily lives of residents.

One key issue the city is tackling by adding a climate lens to decisions and investments is sustainable mobility. By creating a well-connected and comprehensive network of sustainable transport alternatives designed to meet the needs of individual travellers, the authorities hope to decrease the number of cars on the streets.

However, reducing emissions from the transport sector has its own set of challenges. “We need a revolution in mobility”, said Raskob during her intervention at COP 25. This is one of the main challenges the city faces in achieving its emissions reduction goals. “The traffic has not reduced in CO2 emissions.” Essen has reduced its greenhouse gas emissions by 33 percent compared to 1990 levels. “But the last seven percent we cannot manage because the traffic sector is still producing too much CO2” says Raskob.

Essen is also changing the way communities interact with resources such as water. Industrial growth relied heavily on over-consumption and often caused significant environmental damage that the city is now trying to rectify.  A regional flagship project is the re-naturalization of the Emscher, a tributary of the Rhine, which is being rehabilitated from an open sewer into a natural and clean river that runs for 85 km. The project demonstrates that benefits are maximized when the city cooperates with the regional level to identify high potential resource flows locally and deliberately targets improvements for vulnerable neighborhoods.

Similarly, the Zollverein Coalmine that was decommissioned in 1986 has now been repurposed into a park and arts and culture center and declared a UNESCO World Cultural Heritage Site. The sensibly designed park is a hotspot of species diversity with over 800 different animal and plant species, even more than were present before industrialization.
However, there is still more work to be done. Low-income neighborhoods still suffer disproportionately from noise and environmental pollution. “We must still invest more money there than in the other neighborhoods”, says Raskob. “But this is not easy to discuss in the City Council”.

Partnering up to achieve progress
These advances have been enhanced by the Urban Transitions Alliance, an initiative led by ICLEI and funded by the Stiftung Mercator. It has been designed to provide infrastructure, share knowledge and co-create solutions for local action in urban areas that face similar challenges.

“Networks are important when you have problems to solve. A network is not to show who is the best, but to help in critical situations”, expressed Raskob. For instance, Europe’ s transformation process started 30 or 40 years ago, whereas in China the move towards clean industry only began five or ten years ago and they are working to address challenges quickly as they arise. “This is an opportunity to learn from each other and to get inspired.” 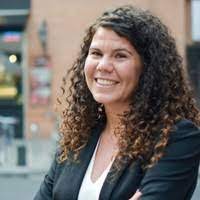