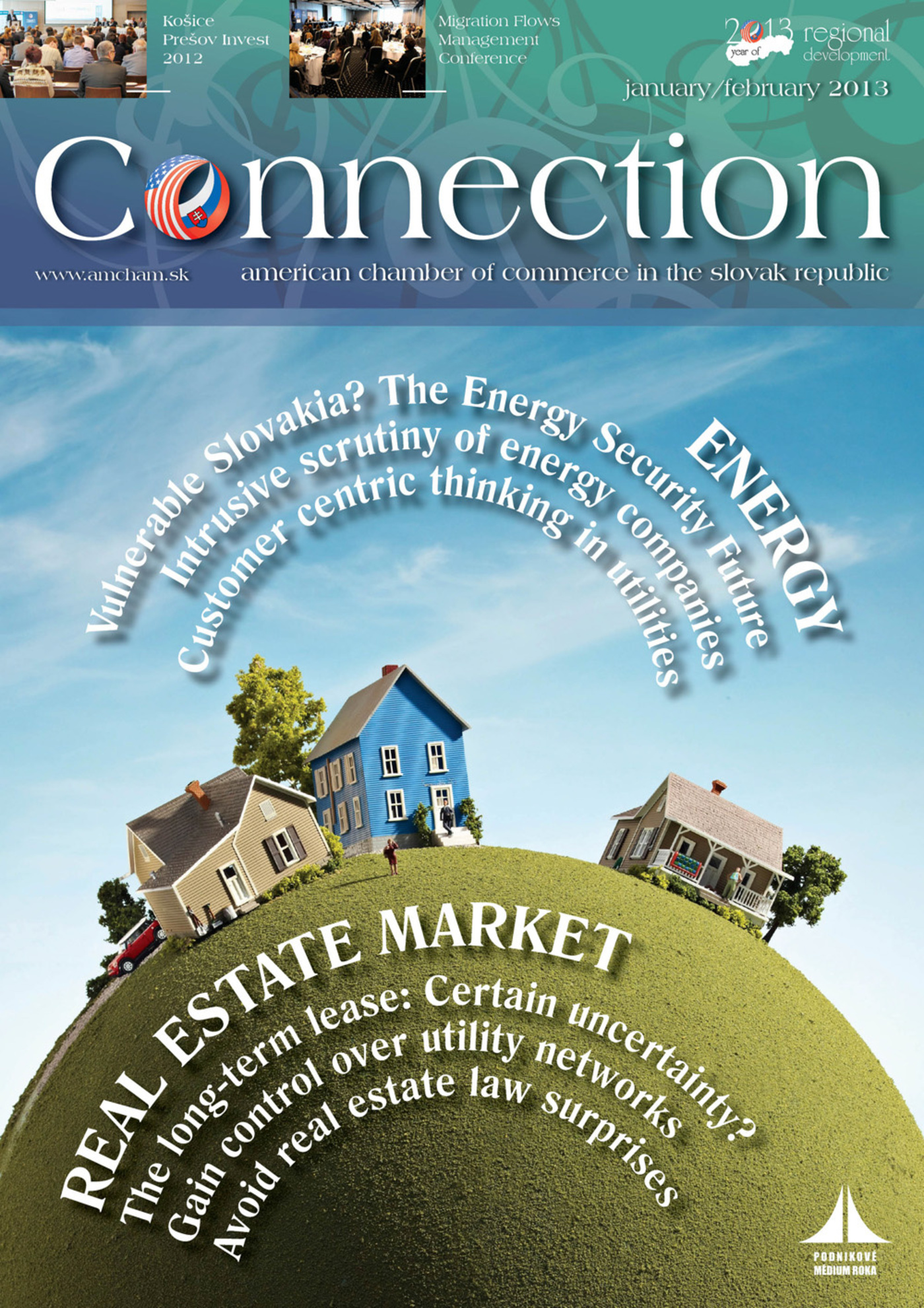 Letter to Members by Milan Veselý, General Manager of Slovalco; Chairman of the AmCham Energy Committee

The energy policy of the Slovak Republic is one of the crucial factors to ensuring a long-lasting and sustainable growth of the Slovak economy. It should be aimed not only towards ensuring energy demands, reducing energy intensity and increasing energy efficiency of individual sectors, but also towards achieving the desired structure of Slovakia’s economy. Since the energy policy applies to almost every business entity in the Slovak Republic, the American Chamber of Commerce intensively seeks to contribute to the creation of the energy policy in order to improve the business environment - not only for more than 30 manufacturers associated in the AmCham, but also for over 300 AmCham members operating in the services and other sectors.

The world is closer than ever

The Bratislava Airport City project is part of the Bratislava Greenfields’ core strategy in land aggregation and improvement. The airport´s 4th quadrant, an area, where the project Bratislava Airport City is located, is the best suited site for meaningful development of cargo, logistic and aircraft maintenance facilities due to the proximity of the runways. Mr. Andrej Brna and Mr. Martin Drázsky, managing partners at Bratislava Greenfields briefly introduce the company and its projects.

During a trip to Prague in January, 2010, Michal Chovanec, CEO of ProudOn Inc., witnessed a group of talented street performers drawing much attention from passers-by. He was surprised that, after noticing the considerable talent of the performers and chatting with them, they indicated that they didn’t have a website. He wasn’t surprised, however, when they said that it was their priority to have a place to eat and sleep. “Why should we bother showing our skills on some free site that makes money on advertising space all around our video without sharing in the profit?” they said. That sparked an idea about starting a modern, functional and feature-filled video website. AmCham had an opportunity to interview Michal Chovanec, CEO of ProudOn, Inc.

Since the 1st of September 2012, three new energy laws have come into effect: the New Energy Act, the New Act on the Regulation of Network Services and the New Act on Specific Levies from Business Activities Conducted in Regulated Industries.

Energy security is currently one of the most important aspects of national security for all countries. It is closely linked to every country’s economy and is one of the main prerequisites for sustainable economic development. Recent disruptions to the world’s energy supply, the gas crisis in Europe in 2009, the global financial and economic crisis and the accident at the nuclear power plant in Fukushima in early 2011 have again prompted discussion among governments about energy security.

Owners and users of buildings in both industrial and logistics parks hope to benefit from the carefree use of utility networks. However, in order to meet deadlines, to have basic functionality and the required permits and to begin operations on time, they often make big concessions when buying buildings or taking them to lease.

The recent economic crisis and even more recent concerns about the future of the euro, as well as the possibility of another downturn in the global economy, have had a significant impact on Slovakia’s real estate market. New trends in the market are appearing. An interesting example of this is the migration of Slovaks to neighboring Austrian villages. They are searching for cheaper living and a better standard of life and social securities.

In the new energy regulatory framework passed last year, additional duties have been imposed on companies in the energy sector. Among them is a broad notification duty that increases the regulatory burden without explaining the policy objective.

Although it is not very common to execute a lease contract for multiple decades (so called “100-year leases”), such a practice does exist. If you are planning to conclude or have already entered into a 100-year lease, read this article to find out about the potential risks lurking behind the door.

Both electricity and natural gas are viewed as perfectly homogeneous products. It does not matter from whom you buy them; their nature is still the same. So, the standard deciding factor when choosing a supplier is price. Aside from the obvious price competition, how can a retailer win in the market?

Sustainability is redefining the balance in real estate investment decision-making. Whether the objective is creating value, reducing cost, or protecting assets against early obsolescence, the combined drivers of regulation and growing stakeholder interest in most markets means that sustainability is increasingly seen as an important commercial consideration in property decisions. The continuing challenging economic conditions appear to have helped sharpen the focus around sustainability, despite misgivings amongst sceptics.

Several amendments to real estate legislation in the Slovak Republic and Czech Republic came into force the 1st of January 2013, and could impact your business. In the following article we briefly introduce these changes: you should continue reading if you don´t want to be taken by surprise.